Plans for a four-story apartment complex near the city’s core have come to a halt.

Cohen-Esrey LLC, based in Overland Park, Kan., planned to build a 49-bed apartment building near the Lincoln Center, provided it received tax credits through the Wisconsin Housing and Economic Development Authority (WHEDA), an incentive used by the state to help finance the construction of low-income rental developments.

But the developer’s application for WHEDA credit was turned down by the state in early April, according to Community Development Director Michael Ostrowski, meaning that the project will not move forward—at least not in its current form.

“There’s always that chance they’ll come back next year with another proposal and maybe apply again,” Ostrowski said Tuesday.

Applications for WHEDA tax credits are scored based on census data for specific areas of the city, the types of units being constructed, walkability, among several other factors, Ostrowski said.

The complex was planned for two adjoining lots, 1504 and 1512 Water St., but the properties remain privately-owned.

“Everything was contingent upon them receiving the tax credits,” Ostrowski said. “We will look to try to find developers for that site, along with other projects in the downtown.”

The city council approved the project last November, one of several new developments totaling over 500 additional bedrooms the city has approved in the past two years.

Under the developer’s agreement, the city would assess a $1.5 million valuation to the property and create a new TIF district surrounding the development and granting it a 20-year tax break.

In return, Cohen-Esrey would spend about $9.5 million razing structures at 1504 and 1512 Water St. and constructing the new complex, and the project would need to be complete by the end of 2020.

The city recently created a new TIF, in part to accommodate Water Street Lofts and another nearby development at the Third St. intersection. that development, Ostrowski said, did receive tax credits and will move forward. 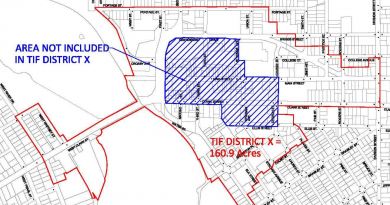 By Brandi Makuski The Portage Co. Sheriff’s Office is reporting that crews have recovered a