Officials in Plover—both the town and the village—have not ordered an evacuation along the Wisconsin River, despite reports in multiple local news outlets.

Town of Plover Chairman Tim Karcheski said he was puzzled by the reports, saying he “hadn’t spoken to any reporter” on Thursday until he was contacted by the Metro Wire newsroom.

“I put something out on the town’s Facebook page warning people to stay off Park Dr., but there are only about a dozen houses out there and those people are seasoned veterans of flooding, they know it’s coming and when to leave,” Karcheski told the Metro Wire Thursday afternoon. “That’s the only flooding we have right now, and I was down there this morning telling residents if they felt they needed to evacuate they could do so and we would be able to assist.”

Karcheski said some news outlets “made their own story” out of the Facebook post, which Karcheski said he made to notify residents he wasn’t able to contact in person.

“From what I’m hearing right now, the river isn’t going to flood bad enough for most people to evacuate,” Karcheski said. “But if it does we will contact the media.”

Park Dr. is just under a mile long, located south of River Dr. south of the Village of Plover.

Flooding is washing out the shoulder and underneath the road, Karcheski said, and motorists could be fined for trying to cross the water-covered surface.

“It’s not safe so we closed it,” Karcheski said. “It’s that simple.”

Village of Plover Administrator Dan Mahoney said he was also confused by the reports in local media outlets, saying, “We have made no announcement to that effect and haven’t heard of any serious flooding concerns in the village.”

Mark Deaver, fire chief in the Village of Plover, said a majority of the village is protected by high bluffs bordering the Wisconsin River, saying it was highly unlikely that body of water would cause any flooding inside the village.

“We do not have any flooding at this time,” Deaver said.

Check back for updates. 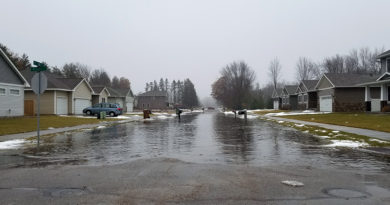 They do more than fight fires…