Dezarey Goozey and David Piette, both of Neenah, were arrested Feb. 18 as part of a drug trafficking investigation by the Dept. of Justice.

While under surveillance by the Wisconsin Division of Criminal Investigation, the two were tracked to Taco Bell, 5400 Hwy. 10 East, and arrested while they waited in line to order food, according to the complaint.

Agents found a glass pipe in Goozey’s pocket and two bags in her purse containing 133.9 grams of meth.

“This quantity of methamphetamine is significant and is consistent with high-level trafficking and sale to lower-level drug dealers,” the complaint read in part.

During questioning, Piette reportedly admitted the two traveled to Menomonie, Wis., earlier in the day to collect money for purchasing drugs in Minnesota.

Goozey told agents she and Piette had been selling meth for about two months, selling “at least” two ounces each week, the complaint said.

Both have an extensive criminal history and remain behind bars on a $25,000 cash bond each. They return to court on March 11. 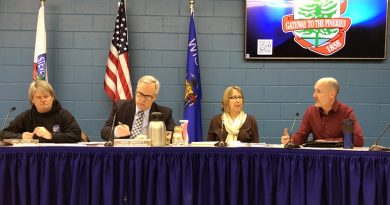 Feb. 26 Property Dispute: A 54-year-old man called deputies from the 1200 block of Sandy