SPASH had their bats rolling on a cool Thursday evening at Bukolt Park, where they swept DC Everest in a conference doubleheader with a 7-0 shutout in game one and 12-3 victory in game two.

A highlight in game one was a one hit home run by junior outfielder Dayne Hoyord in the fourth inning. SPASH drove in three additional runs in the fifth inning with RBIs from Hoyord and Austin Beyer.

Hoyord went 2-for-3 from the plate and brought in two RBIs to lead SPASH.

Logan Schulfer was the winning pitcher going six innings with six strikeouts, two hits, and three walks. Kaleb Schulist pitched one inning out of the bullpen with one strikeout, no hits, no runs, and no walks.

SPASH continued the momentum into game two where Logan Schulfer opened up scoring at the plate when he doubled in the second inning scoring Beyer.

Eleven SPASH players contributed hits in game two with Beyer leading SPASH going 2-for-3 at the plate. Hoyord and Brady Franz lead in RBIs with two.

The Panthers will travel to LaCrosse Central on Friday for a doubleheader at Copeland Park with the first game starting at 5 p.m. 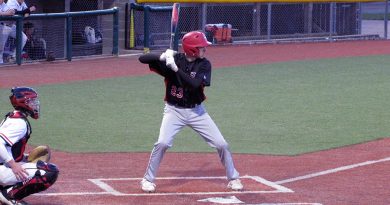 Report: After crash at Kwik Trip, man engages in scuffle with officers