Wisconsin roads are among the worst in the country—and that is a big financial headache for Wisconsinites, as well as the safety hazard and an annoyance while driving.

Crumbling roads, bridges and other infrastructure are a concern throughout the rural, urban and suburban areas of our state. They hamper economic development, cause safety concerns and waste commute time. Bad roads present a very high cost in the budget of the average vehicle owner in Wisconsin.

According to the American Society of Civil Engineers, which rates the country’s infrastructure, Wisconsin citizens driving on roads in need of repair costs each driver $637 per year.

And in its 2018, TRIP, a national nonprofit transportation research group, found that one-half of major local and state-maintained Wisconsin roads are in poor or mediocre condition. The group estimated this costs Wisconsin motorists a total of $6.8 billion statewide annually.

“A vital part of our agency’s mission is to make sure all Wisconsin citizens have the knowledge and tools to achieve the best possible quality of financial wellbeing for themselves and their families,” said Secretary-designee Kathy Koltin Blumenfeld of the Department of Financial Institutions. “The cost of repairing and maintaining a car that drives on neglected Wisconsin roads is far higher than most of us realize. Fixing Wisconsin roads will be a big help for the pocketbooks of families throughout our state.”

Another key example is Wisconsin’s agricultural economy, which relies heavily on a solid system of roads and highways to connect farms to markets—dairy plants, grain elevators, local schools, restaurants and farmers’ markets.

“Wisconsin agriculture products are enjoyed by consumers local, regionally, and internationally,” said Secretary-designee Brad Pfaff of the Department of Agriculture, Trade and Consumer Protection. “To get these high-quality, nutritious products to our nation’s and world’s customers, our agribusinesses rely on a quality transportation network, including our roads, bridges, and rail lines.”

Gov. Tony Evers and his administration have prioritized fixing neglected Wisconsin infrastructure, including the roads, in his proposed budget.

Conklin is the communications director for the Wisconsin Dept. of Financial Institutions 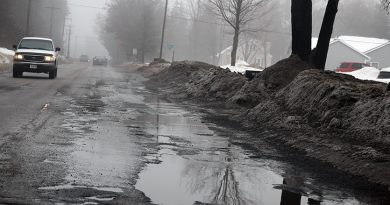 Hull: We know we need a plan for Country Club Dr.

Officials across the county release joint statement on racism

Sept. 23 Speeder: Deputies issued a warning for speeding to a 19-year-old woman at the